Gary Anderson and his original design of the recycling logo, by Gary Anderson, CC BY-SA 3.0

The term „sustainability“ has become increasingly importance in many social debates. Current design history research looks at the aspect of „sustainability“ as well. In mid-June this year, a workshop entitled „Environmental Histories of Design“  was organized by the Norwegian Professor Kjetil Fallan (University of Oslo) along with Finn Arne Jørgensen (Umeå University) at the Rachel Carson Centre at the Ludwig Maximilian University in Munich. A Norwegian research group has been working on aspects of sustainability in design history since 2014. The team, led by Kjetil Fallan, runs its own research blog: www.backtothesustainablefuture.net.

The aim of the workshop in Munich was to discuss previously disregarded historical ties of design and sustainability. The contributions can be grouped into two different approaches. Arguments were either object or discourse-oriented, while both approaches have their advantages. More relevant is what questions are being asked. I methodically pursued a discourse analysis approach, thus it was very exciting for me to see how international colleges work with discourse analyses on design topics. I will briefly introduce three examples and bring in some thought of mine.

The debates in West Germany about design and obsolescence were explored by the Wuppertal Professor Heike Weber. The aspect of a planned life cycle of objects is currently discussed controversially. From a design historical perspective, we know relatively little about this topic. Weber argued, rightly so, that the life cycles of consumer items in the 20th century must not have necessarily reduced. This simplistic story must be questioned critically. The importance of the designer can certainly provide information about the historical development in the field of obsolescence.

The Norwegian Ida Kamilla Lie (University of Oslo) presented first results of her PhD project (based on her master’s thesis), in which she dealt with Victor Papanek’s importance for Scandinavian design discourses. Papanek was active, from 1966 to 1970, in the Scandinavian Design Students Organization (SDO). Particularly important was the question of the social responsibility of designers to society. Lie pointed out,that Papanek played a key role for the former generation of buddying designers. At the same time, this example is a profound analysis of how design discourses were already globalised in the 1960s and 1970s and then rapidly and widely adopted. 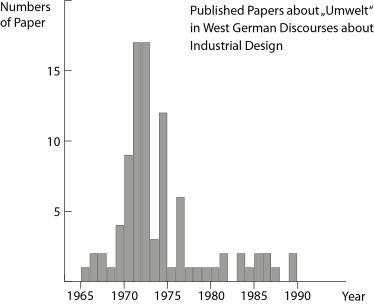 But what did the relationship of environmentalism and design mean in relation to the Federal Republic of Germany? I will try to discuss this shortly on the basis of published articles about environment and industrial design. The following graph shows the time distribution of published debate contributions, such as books, newspaper or magazine articles, which deal with „Umwelt“. This visualization of my literature database illustrates that the concept of environment was addressed from the 1960s to the 1990s onwards. Striking is the rapid increase from 1970 to 1972. A likely explanation could be the publication of Victor Papanek „Design for the Real World – Human Ecology and Social Change“ from 1971, as well as the publications of the Institut für Umweltplanung at Ulm (the successor of the Hochschule für Gestaltung Ulm). Papaneks book introduced the term “international environment” to the design discourse and experienced a varied reception.

Another interesting feature of this statistical distribution are the major differences between the years 1973-1974 and 1975-1976. The strong increase from 1973 to 1974 could be interpreted by the effects of the first oil crisis. This was a relevant development, which also affected the work of industrial designers. However, this shows that the environment was discussed by Papanek’s initiative in the Federal Republic until 1972. In the year 1973 significantly fewer players were published on aspects of the environment. This discussion is related again to the context of the oil price crisis of 1974.

The difference from 1975 to 1976 seems plausible if one considers that at the international ICSID Congress in Moscow 1975, the newly established Working Group „Environment and Design“ presented its results. The results of the ICSID working group were followed by a lot of West German Design, but not discussed further during the year 1976. Gabriele Oropallo (University of Oslo) deals with this aspect in his doctoral thesis. He presented parts of his research results at the above-mentioned workshop at the Rachel Carson Centre. Oropallos research will problematise and analyse the ICSID group, headed by GDR designer Martin Kelm. Remarkably, the contemporary understanding of the term environmental “Umwelt” is not congruent with the current meaning. Nevertheless this shift in meaning is also a big challenge for all researchers‘ in the history of design.