The German Art History Journal „Kunstchronik“ now published in the volume 72/4 a review article by Nanobasvhili and Grossmann about the past architecture exhibition „Hybrid Tbilisi“ in the German Architecture Museum Frankfurt. The article is dealing with the main theses of the exhibition on Georgian Architectural History from the Russian Occupation since the 19th century till the current times. The exhibition was part of a couple of major events during the Frankfurt Book Fair 2018, where the Republic of Georgian was the Guest of Honor with the slogan „Georgia – Made by Characters„.

Full of Architecture – Panorama View over Tbilisi in Sunset

Talking about Soviet art in the public sphere isn’t quite new. Since a quarter of a century went by, the research is just beginning to evaluate and explore the era of communism in Georgia in different projects like the Georgian SovLab  is doing it. As contrast on daily life from nowadays and in former times, or as a newly discovered part of nation’s own story, the historization of the time between 1921 and 1991 in the South Caucus is sometimes highly political. 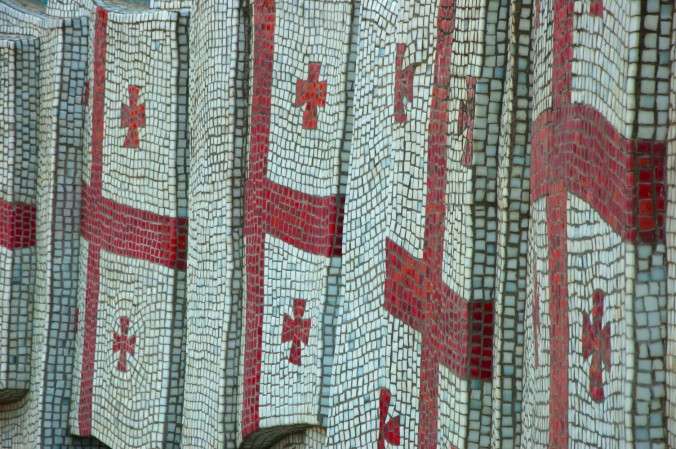 Georgian Flaggs at the World War Two Memorial in Tbilisi

Likewise this counts for art history, even if the art of the past declared to be apolitical. A new book about mosaics in Soviet Georgia demonstrates these two sides of a coin with emphasis.The new catalogue “Art for Architecture. Georgia – Soviet Modernist Mosaics from 1960 to 1990” edited by Nini Palavandishvili and Lena Prents came out at the end of last year at DOM publisher in Berlin. It is a combined book with essays and more than hundred mosaics as examples, which are well illustrated by a lot of past and contemporary photographs. So first, this book with around 270 pages is readable as a classic catalogue. But second, all mosaics are also coordinated on different maps and are virtually marked with QR-code, which is usable with a smartphone and connected to a map.

The volume from Palavandishvili and Prents is a documentation for many of the Soviet mosaics in Georgia between the 1960s and 1990s. The authors cluster the book into two parts, the first section is about the Soviet modernist mosaics in Tbilisi, the second one about the regions (or let’s say whole Georgia without the capital city). Mosaics are shown in different contexts, from i.e. “Sport and Health”, “Industry”, “Housing” or “Services” or else. The index with persons and another one with places plus five maps in different scales help the reader to use this publication in multiple ways.

It is also worth to mention, that the print, the paper quality, and the haptic of the book is very valuable. DOM publisher did great job, it combines high quality in printing with precious content. Thus it is a book, which I really like to have in hands. Its format is so handy, that you can even carry it when you travel in Georgia. At this point it is also helpful to refer to another book in this manner from the DOM publisher house, which came out last year as well: it is an architecture guide throughout Tbilisi by Heike Johenning and Peter Knoch. These complementary boos are highly recommended book for visitors of Georgia, which are interested in art history, especially in architectural history. Unfortunately the city guide is only in German right now, but perhaps that is coming soon.

Anyway I’d like to strengthen one point, which is mentioned by Palavandishvili and Prents, but not followed much (p. 14). From the point of social history, the rise of the art of mosaics in Soviet Georgia has a coincident with the regime change from Khrushchev to Brezhnev very much, so it is also reconnected with politics.

Khrushchev denied and forced to building more economically and not in a kitsch way, like he argued the Stalinist architecture is characterized. He called in 1954 i.e. for less ornaments and more industrial construction in architecture. After Khrushchev lost power in 1964, the rise of the mosaic art started as well. I would argue that here is a very close connection, that mosaics at architecture were a kind of compromise from the post-Khrushchev men in power to the society, especially the so-called nomenclature. In this way new buildings don’t had to be bare, but they were also detached from the architecture in the Stalin era. It seems, that the mosaic art was from this point of view for the Soviet men in power a kind of compromise between different internal fractions. Thus mosaics become an essential part of architectural negotiation in the South Caucasus.

Quite fascination is also the argument by Palavandishvili and Prents, that there is a close connection between Soviet Georgia an Mexico. It is a kind of left folk art bounds together both regions over the globe. I cannot judge this thesis, so I am looking for forward to other reviews and scientific feedback on this catalogue on Georgian Soviet Mosaics. 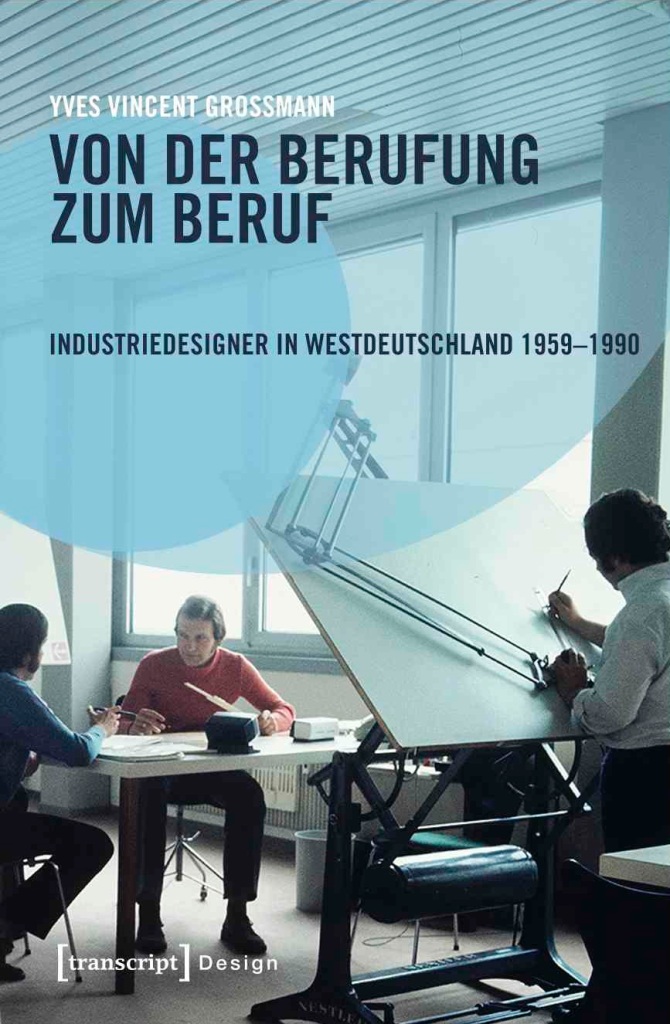 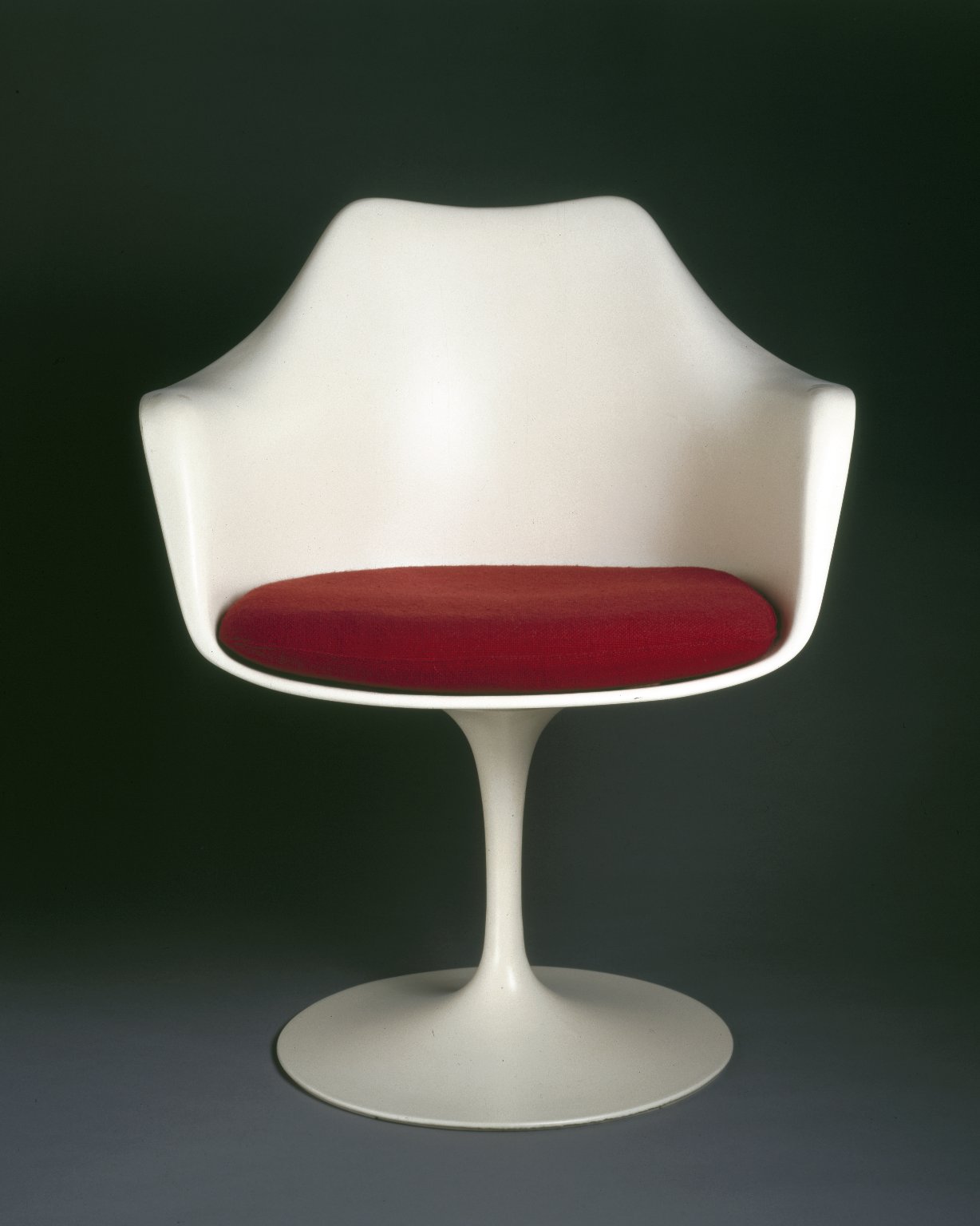 Eero Saarinen: „Pedestal“ Armchair and Seat Cushion, designed 1956; manufactured ca. 1970.This image was uploaded as a donation by the Brooklyn Museum to Wikipedia.